You are here: Home / At Workplace / Three Key Components of Running a Successful Meeting 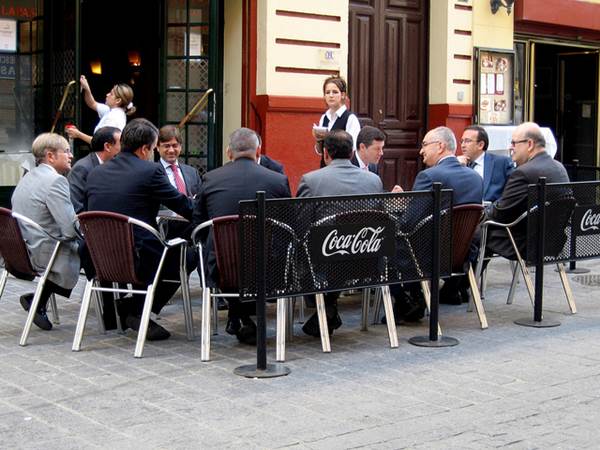 Business Meeting in progress in Seville, Spain – Photo by ECV-OnTheRoad

Meetings are an unavoidable part of everyone’s working life and knowing how to make them successful is an essential skill for all vocations.

Preparing for the Meeting

A successful meeting rarely just happens. Without the necessary groundwork, meetings can be a huge waste of time and become a dreaded activity. Preparing for a meeting includes informing the participants about it and its nature in advance. This gives attendees time for them to prepare any thoughts or ideas, avoiding silence and a non-productive atmosphere. Notifying the participants may also be a chance for you to gather input on what should be discussed during the meeting.

A vital part of the meeting is the Agenda, a list of issues to be covered, prepared beforehand. It is usually prioritized in some way so that important issues are given an appropriate amount of time to be discussed. Non-essential items can be discussed quickly in the beginning or omitted if time is running short. If the meeting involves data, figures, diagrams or visuals of any kind, you must also make sure that the people responsible for these will have them at the meeting. There is nothing worse than not having information at hand or not being able to share it with the group who need to discuss it.

From the beginning of the meeting, it should be made clear who is in charge of the discussion. Without an authority figure overseeing it, a meeting may be unproductive, counterproductive or even damaging. The chairperson should make clear to the participants what is expected of them, the items on the agenda which will be covered and the level of formality required. Sometimes, the chairperson may not take an active role in the meeting and may only be there to oversee the process. If, however, it is your meeting and you are invested in the topics, you should make an effort to reach your goal set out in the beginning of the meeting.

By sticking to the agenda, you should be able to keep the discussion on track. Don’t feel that you have to be completely rigid though, as some digressions can be very productive. Everyone at the meeting has a responsibility to take part, actively discussing and actively listening but it is also important to elicit participation from quieter members as their ideas and opinions may otherwise go overlooked. There should always be a scribe who records key decisions, comments or queries for later reference. The notes created will be used at the end to summarize the outcome of the meeting and later to write a formal record of the meeting called the ‘minutes’.

Once the meeting has finished, any actions decided on should be underway and reported on in the next meeting. The meeting minutes should be circulated to all present to be confirmed and agreed upon. Having this written record of a meeting avoids any misunderstandings or disputes from occurring at a later date. In addition, as chairperson at the meeting, you should take the time afterwards to reflect on how it went and any ways in which it could have been improved. Use these insights to enhance your management of the following (next) meeting.

A well run meeting can be an efficient, productive and even enjoyable work activity. Prepare, manage and follow up effectively and your meetings will be extremely successful.

Lynn Freeman is a freelance blogger and occasionally writes for delivery.com, a site she loves using to find local local delivery pizza and to order food online.