You are here: Home / Career Exploration / The Role of Social Workers in the Wake of a Natural Disaster 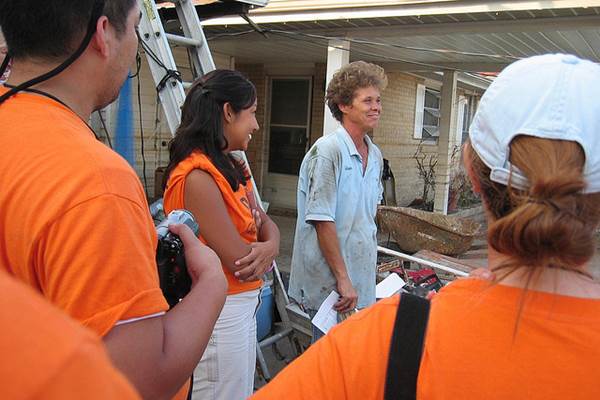 In the years since Hurricane Katrina, there have been a record number of natural disasters around the world, causing billions of dollars in damage and affecting industries across the board. As countries have been rocked by devastating tsunamis, earthquakes, hurricanes and floods, disaster relief has increasingly entered the domain of social workers. These social workers both research natural disaster effects and provide aid to the poor and displaced families who are victims of these effects.

Bloomberg News reports that 2011 and 2012 are first and second place when it comes to billions of damage caused by natural disasters, and Hurricane Sandy collapsed buildings, overflowed rivers and left families without power for weeks in 24 states and 5 nations. Social workers have served multiple roles in the wake of natural disasters around the world but as nature grows more devastating, their work becomes more important.

Many different social services organizations, from the Red Cross to private religious organizations, are directly involved in reconstruction after a natural disaster. One of the most famous of these organizations is Habitat for Humanity which serves over 100 countries providing emergency shelter for disaster victims and raising funds to help rebuild rural and urban areas hardest hit by disasters.

According to PD&R Edge Magazine, over 14 million people have lost their homes due to natural disasters in the past five years. Humanitarian responders often promote community involvement and ownership in the rebuilding process, which can help give the victims of the disaster hope for the future. They deal with organization of labor, clearing access roads for construction, and contacting landowners, which can be difficult in some developing countries. They also work heavily in the United States. Habitat for Humanity continued rebuilding the Gulf Coast for over five years after Hurricane Katrina, contributing to their construction rate of 400 houses per year.

After a natural disaster, relief workers are also on hand to provide counseling and help families cope with the stress of damaged or destroyed housing, job issues, school closures, and sometimes rampant disease or loss of privacy. This can mean working closely with spiritual leaders and others in the community who provide similar services. Workers can assist adults in maintaining a strong routine for their families and not letting their emotions overwhelm them. Disasters can be particularly hard on children, who often cling to their parents and can suffer from nightmares or signs of PTSD.

Social workers devote many research studies to discovering the different psychological impacts of natural disasters so they can better understand how to treat stress disorder and other mental health problems that arise when people have been through a traumatic event. They also have a role as pro-active guides in the aftermath of a disaster, promoting healthy habits for mind and body, coping mechanisms, and prevention of diseases.

3. The Different Challenges of Disaster Relief

The response to natural disasters often depends on the country or area hardest hit, but it also depends on the type of disaster that organizations are responding to. Hurricanes are particularly unique because they come with more warning than other types of disasters. Not only does this allow people to evacuate or properly prepare, it also allows them to talk to their children beforehand about what’s going to happen. Yet hurricanes can often cause more widespread damage than earthquakes, tornadoes, and floods, which occur very suddenly and leave victims in shock.

Social workers who are trained in disaster preparedness learn to recognize the unique challenges of each situation as well as their commonalities. They look for high-risk survivors such as the elderly or disabled. They counsel and assist rescue workers who may be exposed to the most extreme events in the disaster’s wake. Ultimately, the role of the social worker and social services in general is to identify the breadth and scope of the disaster and provide the right medical, social and physical assistance that is needed.

A natural disaster is an extreme example of a traumatic event, and the economic, psychological, and sociological effects on both the individual and the community can be long term. Whether it’s hurricane victims in New Orleans or earthquake survivors in Haiti, social workers can make a difference to those whose lives have been profoundly changed. Helping others is the cornerstone of social work, and when disaster strikes, they are more in need than ever.

Writer Robert Neff is a guest blogger for social work blogs. Interested in becoming a social worker who helps during natural disasters? You may be interested in the social work degree offered at Case Western University.